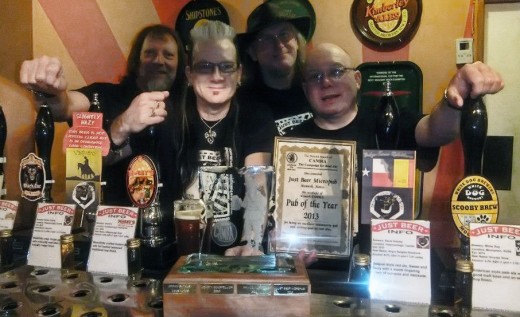 The 4 Tapsters behind the bar at the same time? Surely not!

The top trophy was presented by Ron Allison, who also nominated Just Beer for the prize, after new Newark CAMRA branch Chairman David Moore had made a short speech noting that the award was testament to the quality and consistency of  beer in the pub.

There was a brilliant turnout from both branch members and regulars who enjoyed a buffet as well as two special beers brewed by Bexar County for the occasion and beer from brand-new Nottinghamshire brewery White Dog.  During the afternoon a beer-themed quiz in aid of the Branch’s nominated charity, the Lincs and Notts Air Ambulance, tested the knowledge of even the most knowledgeable beerhead.

Just Beer would like to extend their thanks to everyone involved in the POTY competition and to all of our customers for their continued support.