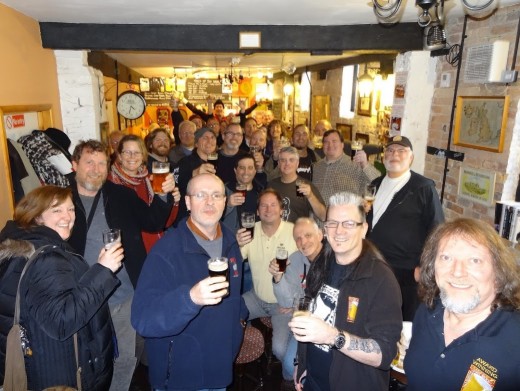 Tapsters Phil and Dunc with Owen Ogletree and the gang from Altlanta, U.S.A.

On Wednesday February 13th, Just Beer went all Stateside for a couple of hours or so, when they hosted Owen Ogletree and a team of 20 beer writers, bar owners and craft brewers from Atlanta, Georgia, U.S.A. Their stop-over at JB was part of a 10 day beer tour of the UK. They arrived about an hour behind schedule due to a combination of some dodgy SatNav info and atrocious snowy weather but were in very high spirits when they piled in through the doors, having come straight from a Bateman’s brewery tour in Wainfleet.

Once here, they were treated to beers from some of the country’s finest microbreweries including new breweries Shiny and Kings Clipstone, plus Porter’s pork pie and local cheeses.

Everyone seemed to have a really good time during their stay, chatting with locals, sharing amusing stories and all too soon it was time to leave. There was still a straggler getting another pint in whilst the others were filtering out the door en route to their next stop, which was Newark Brewery, where a tour of the old Victorian maltings had been arranged.

I escorted the team, accompanied by Newark CAMRA branch Chairman David Moore, on the short coach journey across town. However, upon arriving at the brewery no tour (or beer samples) were forthcoming, so an unscheduled stop was hastily arranged at the nearby Vine Hotel. Four Springhead beers were available, all in top nick and despite organiser Owen announcing that they had time for ‘one half pint!’, the team immediately proceeded to order pints… and several of them!

Twenty minutes later, we were braving the blizzard again on the walk back to the coach and, fuelled by copious amounts of real ale, a massive snowball fight took place, 99% of the snowballs missing their targets! Nonetheless, everybody had a great time and unfortunately it was time to bid farewell. The coach drew off and disappeared into the snowstorm on its way to their next destination – the Brewery Tap at Sheffield railway station.

It had only been two hours or so, but we felt we’d made a lot of friends that day and we’re honoured that they considered Just Beer to be a worthy stop-off on a National tour. I wish I’d had time to speak to everyone but there was too little time. From what I learned from those I did speak with, the beer scene in the States is vibrant and booming, as it is here in the UK and Owen’s group was as passionate about beer as we are at Just Beer. It is very clear to me that beer is a universal language and pub culture has a uniting influence between people of different cultures.

Long may it continue!

Some of the visiting group were:

You can see Owen’s photo’s from the whole trip here.